Done with Tic, Ready for Toc

God doesn’t change, but apparently how we relate to Him can – and does.

We studied hymnody in college. I was intrigued by how people resisted the change from polyphonic (melodic) focus to a more harmonic (vertical, chorded) methodology; how the church drug its feet when the pipe organ rose to popularity and musicians wanted to include it in church music.

During my days as a student, guitars were largely featured in informal gatherings, not Sunday mornings. I remember introducing the guitar to my congregation a couple years after college in my first church. We did that on a Sunday night. It was less formal, and while I took some heat for it, it stayed. Guitars were becoming more acceptable, and I was opening doors for them in my congregation.

I remember one professor taking a planned detour in Form and Analysis to describe how hymns of the 1800s were largely testimonial, utilizing the first-person “I”, and singing about Christian experience rather than about divine attributes or teaching doctrine. The effects of that approach were acutely felt in the US and Europe, but particularly in America.

He wrote eight measures,
and he’s trying to get credit for thirty-two.
No sale.
.
– Dale Jens

Church music was a huge part of my life growing up and for 30 years in ministry or ministry-related positions. I saw the word “worship” eclipse earlier terms. I often wondered if it really was worship we were doing, or if worship was a new label for what we’d been doing all along. I saw combos and praise teams work their way to Sunday morning center stage. We used to call it the platform or the chancel. In a couple of churches I helped it happen. I celebrated the arrival of the Scripture Song. Being a bass, I frowned at the move from four-part SATB to Soprano, Alto, Tenor (SAT) to accommodate the tight three part harmonies of praise music.

It was a bit disconcerting, I’ll admit, to see church music move away from methods where I felt best equipped. “Choir? No, choirs aren’t effective anymore.” (Wait. What? – Are they not effective, or are you not effective in working with them!?) In 2009 I returned to a church I’d served previously. The platform was just as we had remodeled it in the early 80s to accommodate our 140 singers in a church of less than 400. Not so today. It’s a broad challenge. Music ministries with choirs and orchestras have to fight to keep them, It’s an upstream swim.

We’ve gradually moved to a music-up-front mentality not unlike the it’s-too-complicated-for-laity mindset Martin Luther and others since him have objected to. Forty years ago the John W. Peterson Music Company produced Great Hymns of the Faith, a hymnal that featured, among other things, lowered keys so people could more readily sing the hymns they loved, or should love but were previously too high for most people to sing. Today similar concerns are met with “just sing an octave lower”. The altos and basses wince. Christian pop culture has decided for some reason that a high tessitura (vocal home base) is more marketable and the church has gone along.

What I find most disappointing is that in the quest to be marketable, we’re producing more and more lightweight, even trite lyrics set to jingle-like music. For years my high school band director’s words rang in my head repeatedly as I chose music for church services and concerts: “He wrote eight measures, and he’s trying to get credit for thirty-two. No sale. Don’t ever do that, Phil.” I hear his words now as I change the station or stop singing at church. A friend of mine calls it Sesame Street Music for Toddler Christians. For the most part he’s got it right. Yet it’s become what the American church prefers. 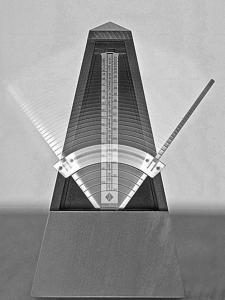 These may not be my most popular paragraphs, and will most-certainly not be my most-liked or shared post, but these thoughts characterized the last decade and a half of my ministry with church musicians. I’ve been told I don’t fit anymore because of my position and that my view is snobbish. “Not really,” I say, “I’m just done with Tic. I’m ready for Toc.” I’m eager for the pendulum to reach its amplitude and turn back around. Hymn writers like Keith and Kristen Getty are doing what they can, but there need more to help reverse the pendulum swing.

I heard a song in church last Sunday; a new one. I quickly reached for my pen and jotted down the title and composer. The song had three verses, a chorus and a well-crafted bridge. The lyrics preached! Written in late 2013, it’s new enough to be fresh. It’s deep enough I caught myself wondering if perhaps Ira Sankey would have used it in his day. “How refreshing!” I thought, “I can’t wait for the day discoveries like this one are frequent, not the exception!”

2 Replies to “Done with Tic, Ready for Toc”