From Deferred Dream to Preferred Future

“I doubt if I’ll ever retire,” I heard my paternal grandfather say, “Re-tread? Probably once or twice. But retire? I’m not planning on it.” Grandpa’s play on words piqued my interest and sent me to ask Mr. Webster about the true meanings of retire and retread. “Pretty cool,” I thought.

My Grandpa Ray was a living illustration of a changed life. A strong, fiery young ranch hand with a growing family, he was bright, hard working, even driven as ranch hands go, despite the Great Depression’s effect on Central Nebraska. The local preacher was making his rounds, calling on the neighborhood folks and Ray let his young wife Eva know in unmistakable terms what would happen if he so much as set a foot on the place a second time. Christ found him anyway.

Through the years, life’s hardships could have hardened and steeled him. Instead they softened and drew him closer to God: The death of their second child to illness at nearly three. Their third –just 14 months old– died the day of her big sister’s funeral. Two and a half weeks later their fourth child was born – my dad. Who was there to turn to but God? A farm accident should have taken his life. But to keep from being pulled the rest of the way into the corn grinder, Ray found his knife and in desperation amputated his own right arm just below the elbow, then got help. Apparently God had something he wanted Ray to do; people He wanted him to affect.

Their little rural church asked Ray to be their pastor and sent him to Chicago to study at Moody Bible Institute. They took care of Eva and the boys but three months later insisted he return. They needed a shepherd. Ray applied himself as rigorously to caring for God’s flock as he had previously cared for ranch livestock. For years he pastored churches in Colorado and Nebraska, lovingly pouring his all into his family and his church, teaching with skill and practicality.

Then came his first “re-tread” opportunity. His teaching skills having been noticed and respected, he exchanged the pulpit for the Bible college lectern. Then years later, his next “re-cap”. Being concerned for the need to establish new converts in the Word and Bible Doctrine, he and Grandma raised missionary support and established a six-night teaching circuit in Utah and Idaho. Grandpa taught Monday night in one location, Tuesday night in the next, Wednesday in the third, and so on, helping new believers –many of them having come out of Mormonism– become rooted in their new-found faith. It was in one of those evening classrooms that he noticed information he used to instantly recall was evading him. Diagnosed with brain cancer in November, he said “Let’s do nothing. I’m ready.” Early the next May, Grandpa Ray stepped from this life into the next.

So it was no surprise to me when “Re-tread” came up in a conversation I had with a couple of cousins after Grandpa’s funeral. He’d been right, and he had finished strong. Though all three of us were taller than Grandpa, we felt dwarfed by his legacy.

I had no idea that day how many times the tires of my life would be re-capped over time. In addition to the churches I served, I’ve been a Public Relations Manager. Taught in a K-8 Christian School. Been a creative consultant. An advanced quality technician. A multimedia system designer and installer. I even filled in as documentation controller for a major manufacturer while the real controller was on maternity leave with twins. 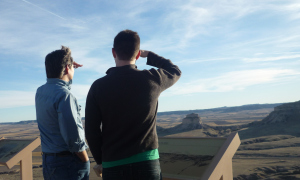 In 2009, when I was asked to return to a church I’d previously served, the congregation’s attitude was pretty much “catch us up and carry on from where we left off” I was elated! “Really? It’s been almost 25 years, you know.” They were sure so we returned. I was ready to finish there. Setting a pace of incremental, steady growth and improvement, I was poised to help keep a multigenerational congregation multiplying and thriving. It felt like I’d pitched my tent ‘bout half a mile from Heaven. “It’ll be a short walk from here when the day comes” I smiled to myself on occasion.

But life isn’t always what it seems. In less than five years I heard myself telling dear friends good-bye, some for the last time, I’m sure, and merged back into job-seeker traffic. God let me try a couple of things while I looked for my figurative EXIT, but I was far from fulfilled.

In January of this year a speaker with a story to tell looked at a group of us, lowered his voice and said

When you find yourself looking – and waiting – and searching for what to do next, don’t overlook your dream delayed, your dream deferred. No matter the reason you’ve not realized it yet, consider this opportunity. You may be standing at the edge of a new level of fulfillment. Seriously consider it.

I took his advice. I pondered a thread of events that began in high school and wove itself through my years:

Before I called it quits that night (I didn’t get much sleep, naturally) I determined to pursue my dream, heretofore deferred for very good reasons.

With my new goal written in ink (the date’s in pencil) the next morning I stepped into my preferred future as writer, communicator, and creative strategist. Not long after, Dave, one of my accountability friends said “I do believe, Phil, this is more than a new chapter; this is a whole new series!”