A couple of instruments I’ve had for a long, long time are getting a new home this weekend.  I think they’ll be very happy there.

Years ago – like in the late 60’s – I played what used to be my grandfather’s, then my dad’s violin for church one Sunday morning. I did my best, as always, but there was nothing extraordinary about it.  What I didn’t know was that someone sitting in church that morning heard me play and thought of something in the closet at home.

That evening, Norm Baker, tall, dark-haired, a big guy, walked in to church with a small-by-comparison violin case in-hand. Before I knew it, I was the surprised, delighted and suddenly proud owner of a much newer violin!   He told me that he’d called his daughter on the phone that afternoon.  “Do you think you’ll ever play your violin again? …  No? May we give it to Phil Ransom?”  She liked the idea and agreed.  I played that violin a lot for many years, then occasionally, and in the last couple of decades, hardly at all.

In 1974 I bought with graduation money, a short-necked Fender bass guitar and amp. My parents weren’t too sure about my purchase, but since it was my money, reluctantly agreed. I transferred what I knew from playing double-bass in concert band to this new instrument and learned my way around. It’s probably been the funnest instrument to play through the years, in part because it’s not at all a solo instrument. Making music pretty much needs to be a shared event when you’re playing bas. I played that little red Fender in large venues and small, formal and pick up, bluegrass & country rock, to praise & worship. Always fun, sometimes empassioned. One of my favorite old pictures (no I’m not posting it here) is of me playing with a couple good friends on a flat-bed truck at Oregon Trail Days, Gering, Nebraska in 1980. The wind blew so hard that afternoon we had to lay the speaker columns on their sides and play from memory. For me, who usually led from behind a microphone or from the conductor’s stand, it felt really good to contribute from behind my little red Fender, letting someone else lead, I remembered what it is to follow.

I wore out the inexpensive case that came with it, so designed and built a case for it in my garage. Why no one told me that 3/16″ plywood would protect it just fine, that 3/4″ was overkill, I don’t know.  Maybe because I didn’t ask!  I needed Hercules and two small boys to help me carry that thing, but we went everywhere. 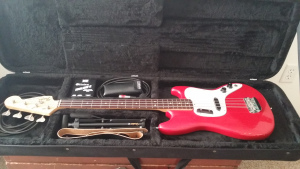 Finally A black commercially produced case replaced it, with room for strap, tuner, cords, music, a guitar stand, tuner and direct box. Everything I’d need for a good time of playing for fun, or worshiping and praising God with my fingers instead of my voice.

When we moved to Wisconsin 15 months ago, my instruments came along. They sat, quietly waiting, ready when needed.  In January I decided to close my 40-year-old chapter of inspirational music and turn my creative energies to writing.  Today I’m giving these friends to a couple of musicians who  will enjoy them, perhaps keep them in service.  Our son Jared is a worship leader in Michigan. He “caught the bug” growing up under my ministry and now runs musical circles around his dad. His wife, Meag’, is a cellist and teaches strings at Marshall Public Schools.

Will I miss them?  Maybe now and then, but mostly I’m choosing to be thankful for the many years of enjoyment they brought me, and the help they were to me as I endeavored to draw people’s attention to God.

I still have an instrument. It’s smaller, quieter, but just as vocal.  It’s the pen. 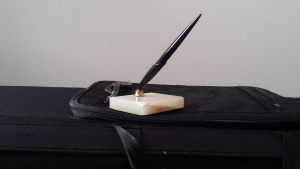 This one, my favorite, is a 1940 Parker 21, bought for $10 in a South Dakota antique store. The price was low because it didn’t work. F.B. Meyer, one of my favorite authors (also one of my dad’s) had a non-working fountain pen on his desk for years. When visitors would pick it up he’d smile and say “I don’t use that one – it refuses to be filled.” This was my non-working object lesson. Then one day, toying with it while I had the phone to my ear, waiting on hold, something gave. I tinkered with it some more. That afternoon I got it to work, all the old dried ink crumbled out of the ink bladder and it agreed to be filled.  It’s now my favorite.

“The pen is mightier than the sword” is more than an old saying, it’s an axiom of truth. In the years ahead I intend to “play the pen” as energetically as I played my violin and my little red bass.  This week I adjusted my personal mission statement.  It’s more general that the one I’ve been using, since I write for more than inspirational purposes, but my Savior and Friend is still the One whose smile of approval I long for.

I am a visionary, incisive, persuasive writer.
Adequately funded by hourly, project, and ongoing clients,
my disciplined lifestyle earns my freedom.

One Reply to “New Homes for a Couple Old Instruments”