Peter’s Collapse came on him suddenly, and with but two warnings. The first was when Jesus told him “The truth is, this very night, before the rooster crows, you will deny (disown) me three times.”

Peter was an insider with Jesus if there ever was one. Jesus only brought three of his closest with him into Gethsemane and asked them to watch with him while he prayed: Peter, and the two brothers James and John. They all three fell asleep.

I wonder. If Peter had known what was coming his way, would he have had any trouble at all staying awake? Would prayer have driven sleep from him and brought time to a stand-still? Probably. We can’t be overly hard on him, though; we’re no different. At least I’m not. Peter knew no more about what was coming than any of us would have known. It had been a long and grueling day. Sleep overcame all three of them. Again. And yet again.

Then came the betrayal by Judas. Imagine the emotion that must have welled up inside Peter. Can you? Peter’s one of three men VERY close to the Master and Judas does what?!! Sells him to the priests and leaders??! You traitor!

The arrest. Jesus’ rebuke (I’m looking at the end of Matthew 26 if you want to follow the narrative) and then the rest of the guys desert Him and slip into the shadows’ protection. (verse 56)

I noticed recently that there was only one who dared to follow, and he at a distance. Peter. (verse 58) This is only my opinion, but I believe he was still acting in ambitious zeal at this point. I don’t think he was was being a coward, not yet. I think Peter wanted to know what was happening. If there was a place to step up to the cause, he had every intention of making a difference, maybe THE difference. This was Jesus they were dealing with, his teacher, the one Peter knew was the Christ, the Son of the living God! So he sat down with the officers so he’d be there to see the outcome. (verse 58).

There was this person in the crowd. She was only a servant girl, no clout, no influence, really, but she recognized him and said “You were with him.”

“I don’t know what you’re talking about.” The lie came out of nowhere. I think I’d have lied too. So would you. Remember the others are long-gone, at least Peter’s within earshot and he’s straining hard to overhear everything he can. My guess is he lied for the same reason the rest of us do: Sometimes we lie because we’re afraid of what will happen if we tell the truth. Other times we want something and we doubt we’ll get it if we do tell the truth. So we lie.

Peter doesn’t want to make a scene. Sitting there by the fire I think he wants to stay where he is so he can get the information he’s after. So he lies about knowing his friend Jesus.

A little later another servant-girl recognizes him out by the gate and identifies him. “This man was with Jesus of Nazareth”. He swears (like that makes a guy’s words stronger somehow) “I don’t know the man.”

Then another identifies him, and his accent. “Even the way you talk gives you away.”

And Peter loses it. He swears and curses, the way he used to at work every night out on the lake, before Jesus called him away from his fishing boat, nets and crew.

And that’s when some rooster fills his lungs with proud air, surprised that he’s finally managed to beat the others to it and be the first in the neighborhood to crow.

Jesus looks at Peter – but says nothing. And Peter dies inside. Oh, dear God!!

There’s nothing quite like going down all of a sudden, right in the middle of the pack. 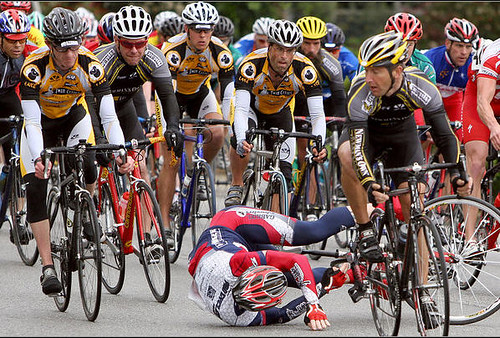 There’s nothing like going along, thinking you have everything under control, doing your best to stay on top of life and then in an instant 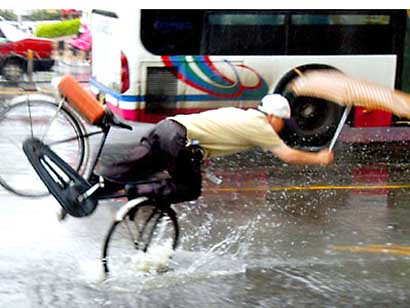 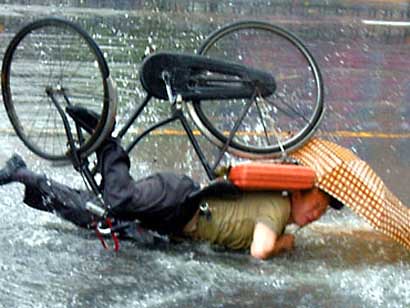 It’s bad enough when it’s a race, or work. But when it’s your life, your ministry, your LORD … there’s only one thing to do, and that’s what Peter did.

Realizing the Lord was right and he was wrong, he broke from the crowd to get by himself. And he cried.

He didn’t sniffle. He didn’t smear a trace of a tear with the heel of a callused hand. Peter bawled. His body squeezed and convulsed his cries and tears from him with the same force the flu empties your stomach. Slow-motion agony pounded his fists against the wall in front of him and he wailed. His hands clenched his own hair and dared him to rip it out. He talked to himself. Scolded himself. Told himself what he really thought. Peter was a man abruptly brought to the end of himself. A man faced with the harshness of realizing he’d turned his back on his best friend only hours after he said he never would! And his friend was the Son of God! He wept. From the deepest recesses of his inner man he wept. And they weren’t sweet tears. They were bitter. They were tears he shouldn’t have had to cry, but they were his, only his, and he owned them.

When there were no more tears he cried on, the dry lump in his throat and the knot in his stomach threatening to send him into cramps, his swallows few and far between . Once in a while a tiny little whimper escaped, a faint reminder of the anguish he’d brought on himself. “Why?!” and “How COULD I?!!” echoed back and forth in the silent caverns of his mind, and he didn’t have an answer for either. Not a good one, anyway, his words didn’t mean anything anymore.

i do not know the man

I’m a liar. An unfaithful friend. My word is worthless. I’m a weakling. I can’t believe what I just did.

Peter picked himself up and began to walk -slowly- in the direction of his subdivision. I need to go. I didn’t come home last night and I’ve already missed breakfast —just as well, who can eat at a time like this?

The silence followed him home, tormenting him the entire way with thoughts of having to tell his wife what happened when she asked what was wrong. If she noticed. And she would, how could she not?